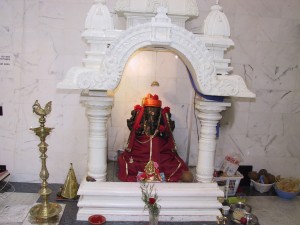 The deity of Shri Ganesha was a gift to the Hindu community of Lansing in 1982 by Satguru Sivaya Subramuniyaswami of Hawaii.  Shri Ganesha remained in the home of community members Sudhakar and Usha Kulkarni for ten years, before moving to the newly constructed temple in April 1992.

Ganesha is widely revered as the remover of obstacles, the patron of arts and sciences and the deva of intellect and wisdom. As the god of beginnings, he is honoured at the start of rites and ceremonies. In the Ganapatya tradition of Hinduism, Ganesha is the supreme deity.