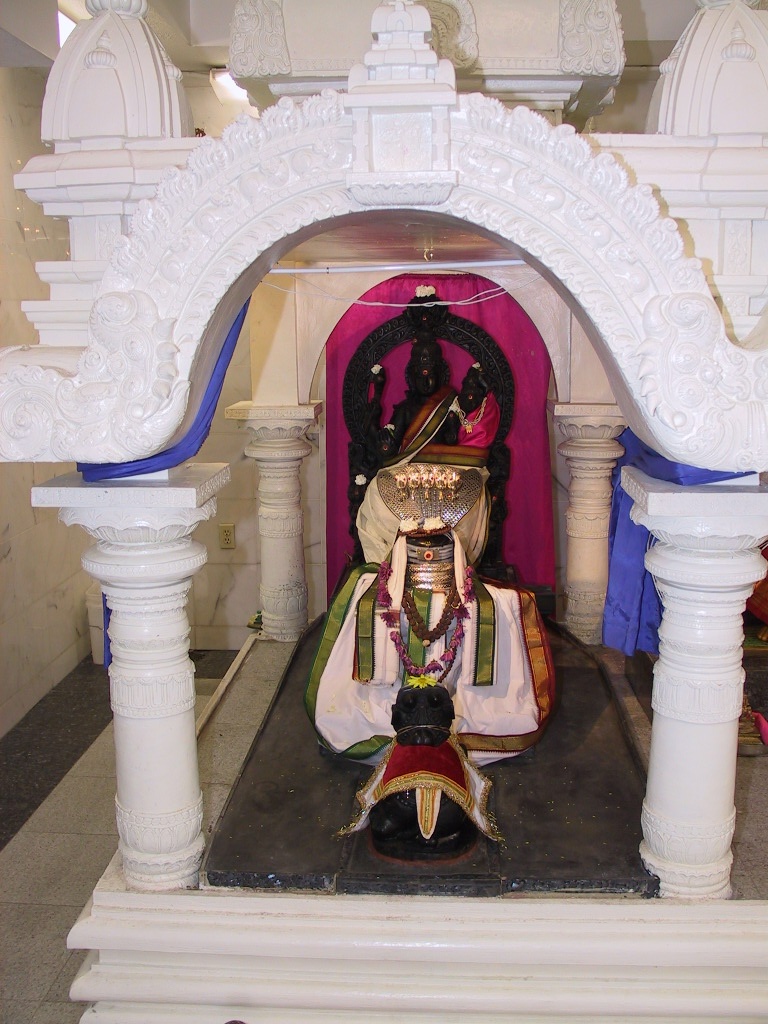 This photograph shows Shri Uma-Maheshwara (top), Shri Shiva Linga (center), and Shri Nandikeshwara (bottom). For a closer view of Shri Uma-Maheshwara. Uma and Maheshwara are the parents of Shri Ganesha and Shri Kartikeya (Subrahmanya). Shiva means “auspiciousness” and also “one in whom the whole of creation sleeps after dissolution”. It is from destruction that creation again rises, hence destruction is the ultimate cause, the unmanifest origin of creation.

The Shiva Parivar sculptures (consisting of the group shown here plus Shri Kartikeya) are the donation of Manohar and Lokeshwari Naga. The sculptures were made in early 1994 in India by Shri Manjunatha Charya and his assistants from the town of Shivarapatna near Bangalore, using black granite from a local quarry there. This sculptor, who comes from a family that has nurtured this art for generations, has been honored by the President of India for his high-quality work in both stone and metal. At the time of the Prana Pratistha (consecration) ceremony in June 10-14, 1998, Shri Shiva Linga was given the special name of Shri Sarovara Sangameshwara, meaning “Lord at the Confluence of the Lakes,” in reference to the location in Michigan, the Great Lakes State. The silver Nagaraja (hooded serpent) adorning Shri Sarovara Sangameshwara was added in December 1999.