Pictures of the temple taken in the summer of 2006 (left) and 2008 (right), showing the building addition that had been completed in the interval. 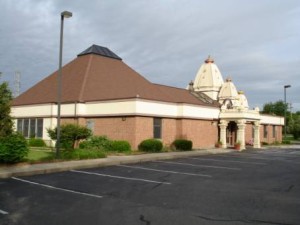 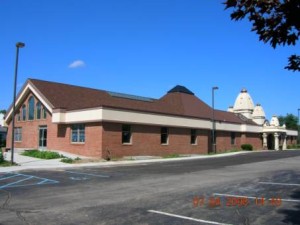 The Bharatiya Temple of Lansing is located at 955 Haslett Road, Haslett, Michigan 48840 .
Its inauguration on March 12, 1994 marked the beginning of a new era for the Hindu community in the greater
Lansing area and was the culmination of 12 years of effort by Sudhakar Kulkarni, Shrikumar Poddar and Prakash Kapoor,
the first group of Trustees of the Temple.
The objectives of the Temple, as set down in its Constitution, are as follows:

In the second half of 1994, five groups of deities  were brought from India and placed in the Temple sanctum. The consecration (Maha Prana Pratishta) of these deities, a once-in-a-lifetime event for any temple, was celebrated during June 10-14, 1998 and was a deeply satisfying event for all participants; during this ceremony, the deities were installed in seven sanctums designed by acclaimed architect Muthiah Sthapathi and built under his direction by a crew of skilled workers. In November that year, three shikharas (towers) were installed on top of the building over the sanctum area. The completion of this phase of the temple construction was celebrated with the performance of Shikhara Kumbhabhishekam, the ceremony of worshipfully showering the Kalasha (sacred pot) atop the central shikhara with holy water from Kumbhas (pots), on June 26-27, 1999. Consecration of the planetary deities, the Navagrahas, was celebrated as a 3-day event during Independence Day Weekend 2006 (June 30 – July 2, 2006).

At the request of the Lansing-area Jain families, a separate sanctum was completed in the Temple building in 1999 for installing Jain murtis. A Svetambar murti of Bhagavan Mahavir and a Digambar murti of Bhagavan Parsvanath arrived from India in December 1999, and their Pratishtha was celebrated during May 26-29, 2000. Since the beginning of 2000, Jain devotees have conducted a Puja on the 4th Sunday of every month at 11 AM and Arati every evening at 7:30 PM.

In response to the growing needs of the community, a temple expansion project was started in Fall 2007. The completion of the year-long project in September 2008 added several much-needed amenities: a beautiful acoustic hall, a large dining facility, and several other amenities, which community members are enjoying for various functions.

A five-day Maha Kumbhabhishekam ceremony to re-energize the Deities and mark the completion of twelve years of the Temple since the initial consecration of the Deities in June 1998 was celebrated on June 9-13, 2010. The power and sanctity of the Temple depends on such periodic major ceremonies in addition to the daily rituals.

The Temple has brought our community together, providing the mid-Michigan Hindu and Jain community a place to practice our religion, foster spiritual growth, and introduce the Hindu religion and culture to our children and to those interested in learning about them. It was a particularly proud moment for our community when East Lansing High School’s graduating seniors held their Baccalaureate event at our Temple in May 2009. It has fostered numerous religious, spiritual, and social programs. Moreover, the Temple has been critical to increasing the visibility of our community in the Greater Lansing area.

Since January 1998, the Temple has had the services of full-time priests. For most of the time, there have been two priests. Upon the arrival of the priests, the Temple open hours were expanded and a schedule of two Pujas every day of the year was implemented .Both priests are available for private pujas at devotees homes or places of business. To schedule services both in and outside the temple, please call them either at the temple (phone number 517-339-6337) or at their homes. For Shastriji: home phone number is 517-575-0888, cell number is 517-944-2100, and e-mail is shastrimaharaj@gmail.com. For Panditji: cell number is 602-363-4462 and e-mail is vedicpandit@gmail.com. Another way to schedule their services is to contact the Temple’s Religious Events committee chairperson, Meena Sharma at (517) 927-3294 or by e-mailing to sharmamt@aol.com.

If you are residing in or visiting the Lansing area, we invite you to visit our Temple, no matter whether your interest is to observe or to participate. For further information about the Temple, please call any member of the democratically-elected nine-member Board of Trustees.

We have created Links to several Web sites devoted to Hinduism, Hindu organizations, other Bharatiya religions, general-interest topics dealing with India, and Indian stories for children.