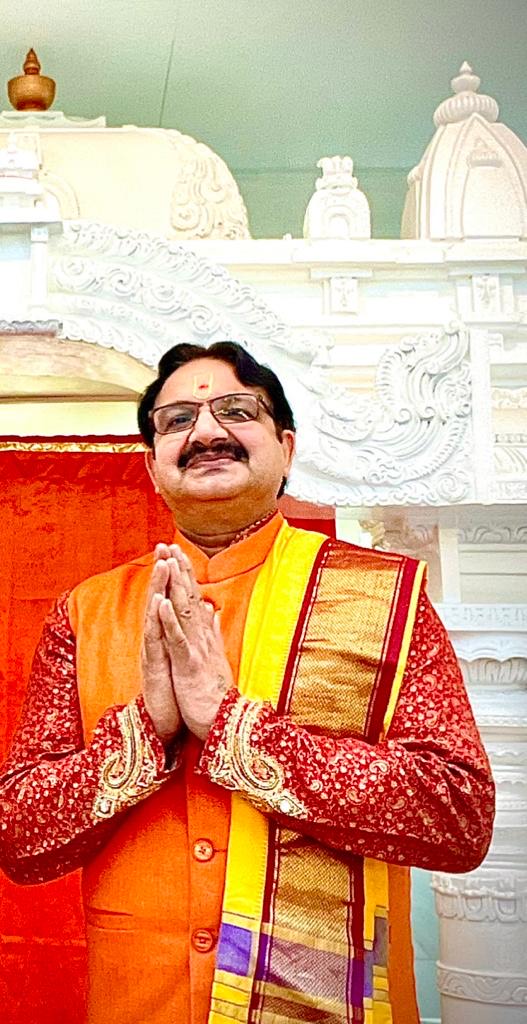 Acharya Surendra Bhardwaj (Shastriji) joined the Temple at the end of May 2002. He came to us from New Delhi. His family (wife Navodita, son Mayank, and daughter Ritam) joined him in late 2002 and early 2003. He was born in 1960. His academic qualifications include the Vidyadhikari degree (1983) from Gurukul Kangari University, Hardwar; the Uttarmadhyama degree (1986) from Vedamau Vaidic Vidyapeeth, Badayu; and the Shastri degree (1989) from Sampoornanand Sanskrit University, Varanasi. During 1996 and 1997, he had his Karmakand training (for performing rituals) in Delhi at Ramayan Vidyapeeth and Shri Lal Bahadur Shastri Rashtriya Sanskrit Vidyapeeth. Prior to joining our Temple, he was a teacher of Sanskrit at the International Public School in Delhi and the President of Sanskrit Sewa Sansthan in that city. He is fluent in Hindi, Sanskrit, Punjabi, Haryanavi, and Rajasthani, and also speaks English. 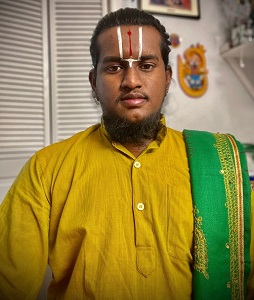 The priest(s) are available for private pujas at devotees’ homes or places of business. To schedule services both in and outside the temple, please call them either at the temple (phone number 517-339-6337) or at their homes. For Shastriji: home phone number is 517-575-0888, cell number is 517-944-2100, and e-mail is shastrijimaharaj@gmail.com. For Shreyas Bhattarji: at (848) 239-8776, and email is Sreyasramanuja@gmail.com Or call the temple at (517) 339-6337. Another way to schedule their services is to contact the Temple’s Religious Events committee chairperson, Meena Sharma, by e-mailing sharmamt@aol.com.